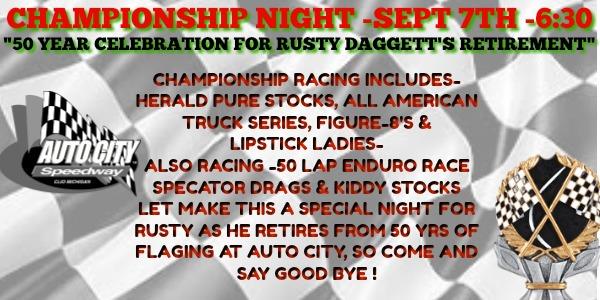 Auto City Speedway Results 9/7/19
This past Saturday night was the determining of the 2019 Champions for the points series at Auto City Speedway, along with a celebration for veteran flagman Rusty Daggett. The evening started out overcast and had a bit of a chill, but it was perfect for the racing action that was going to take place.
There was no qualifying, as the features would be a total invert for the double point’s night. The night did start early at 6:30pm and first up were the Herald Pure Stock 8 lap heat races. The first heat went to a first time winner at Auto City, Michael Briggs #77 getting the win. Heat number two went to Chad Lamson in his #888. The All American Trucks heats were next up and it was veteran driver Darren Burton #05 taking the checkered. In heat number two it was Josh Delong’s #067 getting the win.
With flagman Rusty Daggett retiring, every competitor drove out onto the track to hand Mr. Daggett a small checkered flag as a way of paying tribute. The last car, being driven by Michigan Motorsports Hall of Famer Jay Woolworth, handed Rusty a “caution flag” which he took from Rusty many years ago. Tonight Jay was giving it back, with it being signed by all the current drivers. After Jay, the next car to pass Rusty was the Auto City Pace car, with track owner Joe Dewitte driving getting out to give Rusty a commemorative embroidered Checkered Flag and an elegant glass plaque. There were many notables in the audience and on the track with the likes of former flagman Bill Lennox, Don O’Guinn, Bob Snellenberger, Dr. Bob Ducharme, Tammy Loynes and many others from Rusty’s history.
Then it was onto the Herald Pure Stock 30 lap feature, and when the green flag flew, it was Briggs #77 leading the way over John Puckett II #51 and Tim Kirby #81. As the field battled three wide, it did not take long for the likes of Lamson, J.T. Clayton #54, Bruce Dunton JR. #19 and Michael Hayes #12 to work their way up to the front. When the checkered flag flew, it was Lamson, Clayton, Dunton Jr. and Hayes respectfully. With that win, it was declared and confirmed that J. T. James Clayton was the 2019 Herald Pure Stock Champion.
The Lipstick ladies were now ready to hit the track and it was Barb Boone in her yellow #22 getting the early lead. When it was all said and done, it was defending champion, Amanda Clayton’s pink #53 taking the win, followed by Boone and Rebecca DeBoer #51. In dominant fashion, Amanda claimed the 2019 Lipstick Ladies Championship.
The All American Trucks 30 lap feature was next and there were seventeen drivers ready to take the green. The early leader was Darren Burton’s #05 and had a pretty good lead over the #422 of Anthony Richardson and #11 Ryan Cudd. As the field was battling, on lap 19 a yellow came out and that changed the advantage Burton had over the field. When they went back to green, the battle was on as Josh Delong got his #067 into the mix. Delong did get by Richardson and had his sights set on the #05 truck. As they battled side by side, Delong pulled the ole ‘criss-cross move’ to get by Burton. Darren Burton did try to maneuver around to get that top spot back, but Josh Delong put his truck on the rails and captured the win over Burton, Richardson, Paul Rigda III #43 and Danny Smith #06. With the win, both Delong and Burton parked on the front-stretch (front) bumper to bumper to a tire smoking burnout to give the fans a bit of a ‘smoke show’. With a commanding performance all season long, it was Josh Delong #067 winning the 2019 All American Truck Championship.
The Spectator Drags were on the schedule tonight and it was the ’88 Toyota of Camaro Joe getting the win in a King of the Hill showdown.
The Auto City Figure 8’s were now up for their 15 lap race and with eleven competitors going for the win, it was one wild and wooly race. Michael Hayes #12 was the early leader as the laps were ticking down. Dillon Eatons purple #88 was contending for a bit, but unfortunately spun coming onto one of the straight-aways. By lap 4, Chad Lamson had made his way through the field to second and had his work cut out for him to catch and then pass Hayes. It took Lamson to the very last lap to make his bid for the win and with doing what he’s done all year long, he did make the pass for the win over Hayes. Third was the #422 of Anthony Richardson. Going into this race, Chad had already locked the 2019 Championship for the Auto City Figure 8’s for his continued reign on the figure 8 course.
The last race of the night was the 50 lap Enduro and it was one crazy and exciting race to end the night for sure. Paul Rigda III #43 took the lead early and was making his way through all traffic well. But also was the #067 Crown Vic of Josh Delong. By lap 24, Delong had got up to and passed Rigda for the lead. As the laps counted down and when all 50 were completed, it was Delong getting the win and Rigda for second.
There is one more event for the 2019 season and it will be September 28th, that being the Halloween Bash Maximum Destruction, with a scheduled autograph session as well. Check out all the info at www.autocityspeedway.com or Auto City Speedways Facebook page and we’ll “See You at the City!”
Back to News
Driver Registration