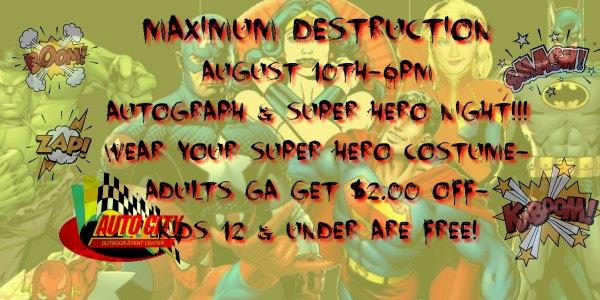 Well Mother Nature gave Auto City another pass for a fun Super Hero Maximum Destruction night which also included an autograph session before the race night started. A huge shout out to huge contingent of drivers that handed out autographed photos of their cars/trucks and treats to the kids and adults!
Before the 16 races were even run, qualifying took place for only the All American Trucks (A.A.T.) and the Herald Pure Stocks tonight. The top qualifier for the A.A.T. was Jacob Zervan #03 with a 17.61 and in the Pure Stocks it was Chad Lamson’s #888 with a 16.20. The first race on the schedule was the Lipstick Ladies and it was point’s leader Amanda Clayton #53 getting another win. Second went to Barbara Boone #22.
The A.A.T. 30 lap feature was next and the #21 of Greg Long and the #43 of Paul Rigda III were amongst early leaders, but after lap 15, it was the #067 of Josh Delong getting to the front. Once the checkered flag flew, it was Delong, Rigda, Zervan, Nick DeBoer #74 and Zack Lopez #18 respectfully.
Now the Herald Pure Stock 30 lap feature was up.  On the very first lap, it was Amanda Clayton #53 getting loose up front and collecting point’s leader the #54 of J.T. James Clayton and the #19 of Bruce Dunton Jr., while others took evasive action. The damage to Dunton was too extensive and he was done for the night. J.T. did remove some body panels and returned back to the lineup. Michael Hayes #12 developed a smoking issue, but did get that resolved too and returned. Once the race did get underway, it was J.T., Chad Lamson #888 and Hayes battling it out. By lap 20 it was Lamson to the lead and he stayed there to the finish. The finishing order for the top five ended up Lamson, J.T., Hayes, Adam Rhodes #20 and the #3w of Jeff West.
It was now onto the “destruction” portion of the night, starting with the Boat race. When the water settled, it was first time winner Tyler Hopkins #76 getting the win. The Draggin race was next and once the checkered flag flew, it was the black #7 truck of Brad Reseigh getting the win. Following that was the Chain Gang race and with thirteen teams, it was pretty wild. The familiar team of Justin Pepitone #948 and Gerald Persails Jr. #80 ended up with the victory. Next was the unique reverse race, yes driving backwards in reverse, and it was the #422 of Anthony Richardson getting the win.
The I-75 race followed and with twenty seven competitors going for 20 laps, it got to be very congested to say the least. When it was all said and done, it was the Crown Vic #21 of Greg Long getting the victory.
The Auto City Figure 8’s were next on the schedule for 15 laps and after all the laps were completed, it was ten time consecutive champion Chad Lamson, in his Silver Bullet #888, getting a clean sweep for the night with yet another win. He was followed by the #23 of Darby Christensen and the #067 Max D truck of Josh Delong.
The Push race followed and after the 12 laps were completed, it was the #407 of Tom Stacey and #54 of Tim Curtis getting their first win as a team. The first of two Flag Pole races was up next and Josh Delong in his Max D #067 truck took the win. In the second race it was first time winner Ryan Hart #242 taking the checkered.
The 50 lap Enduro was on tap now and with thirty seven vehicles vying for the win, it was the #067 Max D truck of Josh Delong topping the field, as attrition wore on many. He was followed by the #948 of Justin Pepitone. The always interesting Skid Cars were next, and without doubt, Shane Fogarty showed the crowd how it’s done in his #87 getting yet another win in this race.
The School Buses were hitting the Figure 8 now for their race, and when the checkered flew it was J.T. James Clayton getting the victory in the ‘Bond of Brothers’ bus.
The last race of the night was the Trailer Figure 8, and when the carnage stopped, it was again Greg Long in his #21 Crown Vic taking home the win.
Racing will be taking a few weeks off, but will be back on August 31st with a BACK 2 SCHOOL BASH Maximum Destruction style.
Check out all the details on upcoming events at www.autocityspeedway.com and “We’ll See You at the City”
Back to News
Driver Registration