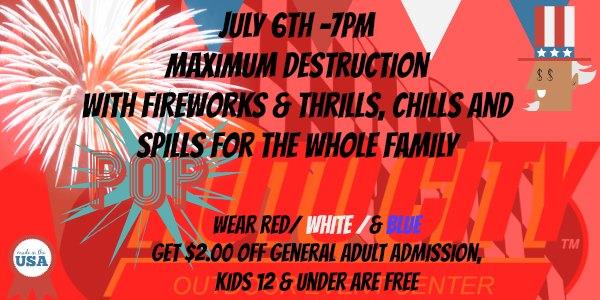 Auto City Speedway Results 7/6/19
It started out as a hot one at Auto City Speedway this past Saturday, with temps nearing the 90 degree mark and a slight wind. Once the sun started setting, things did a flip-flop as the night progressed, with the temps dropping and the racing heating up.
The All American Trucks(A.A.T.) were the only class to qualify and it was the usual suspect, Josh Delong in his #067 A.A.T. truck getting the top spot with a 17.73.
After the pre-race ceremony, it was the Lipstick Ladies who were first up. When the green flag dropped on the second lap, new driver Natalie Kern's #66 mini-van took a hard hit into the front stretch wall coming out of turn four. A red flag was thrown to get her out and make sure she was OK. Once the race started back up, it was Amanda Clayton’s pink #53 jumping into the lead with Barb Boone in her yellow #22 trying to chase her down. After the 8 laps were completed, it was Amanda getting yet another win followed by Barb.
Then it was time for the A.A.T. 30 lap feature race. Jimmy Bass #116 got the early lead and seemed to be pulling away from the field. The #43 of Paul Rigda III worked his way up to second and the #06 of Danny Smith got up to third. By lap 8, things had changed, as Josh Delong wheeled his way from the 16th starting spot (due to a 16 truck inversion) and was on a mission to track Bass down. Jacob Zervan #03 was on the move as well coming through the field to get up to the second spot. As Delong had a commanding lead, it seemed like it was going to be easy pickings for the win. But a late race caution would change that perspective putting Zervan right next to Delong for the restart. When the green came back out, the two raced side by side exchanging the lead numerous times. Coming out of turn 4 though, it was Josh Delong getting the win as Zervan was starting to get loose in the turns. Taking the third spot was Jimmy Bass.
The good ole 10 lap Boat race was next and after the water settled and the checkered flew, it was Grant Parker #17 docking his boat at the finish line for the win.
The Draggin’ race was now up and with the largest field this season of 18 competitors going for 10 laps, it was the #224 of Jason Grissom getting the win.
Ten teams, making it twenty vehicles, were now up for the Chain Gang race. It ended with Josh Delong in his #067, in his destruction truck, pulling Jim Rifki to the win.
Now on the schedule was the relatively new I-75 race for 20 laps. This time, it was loner Josh Delong getting that win as well.
In the Push race it was again, ten teams / twenty vehicles for 12 laps. This time it was the team of Justin Pepitone #948 and Gerald Persails Jr. #80 taking the win over the Delong/Rifki team.
The first of two 10 lap Flag Pole races were now on the agenda and it was Danny Smith in his #06 getting the victory over the other twelve competitors. In the second Flag Pole race it was, yep, you guessed it, Josh Delong getting the win.
50 laps of Enduro racing was next and wow, what a race it was. The #06 of Danny Smith was the early leader, but the #948 and #067 made their way up to the front slicin’ and dicin’ through the traffic. Just past the halfway mark on lap 28, the #76 truck of Tyler Hopkins took a roll onto his roof which brought out a red flag. Once the action started back up, it finished with Josh Delong in his #067 Crown Vic getting the win over Justin Pepitone #948 in his Crown Vic.
With it now being dusk, the Night Owl Pyrotechnics put on one awesome July 4th traditional fireworks display, ending it with a special message from Auto City that said THANK YOU AC.
Once the track lights were getting back up and running, it was the Skid Car race next. The familiar name of Shane Fogerty #87 got yet another win in this race.
The Figure 8 Bus race was now up and after the 10 laps were completed, it was “Front Page Paul” Rigda III getting the win in the Bond of Brothers bus. It was also Paul’s third win in the past three weeks, all in different kinds of races.
The last race of the night was the 10 lap Figure 8 Trailer race and winning the ‘best decorated trailer’ was Justin June’s #032 capturing the crowds vote. Once the green flag flew, it was chaos all over the track. Once the checkered flag flew, it was the #067 of Josh Delong getting the win and putting on one heck of a winning show doing donuts all along the front stretch with his trailer still attached.
Next Saturday will be the I.C.A.R. MAIN EVENT OUTLAW SUPER SHOW ”ASH KICKER?. Check out all the details on upcoming events at www.autocityspeedway.com and “We’ll See You at the City
Back to News
Driver Registration