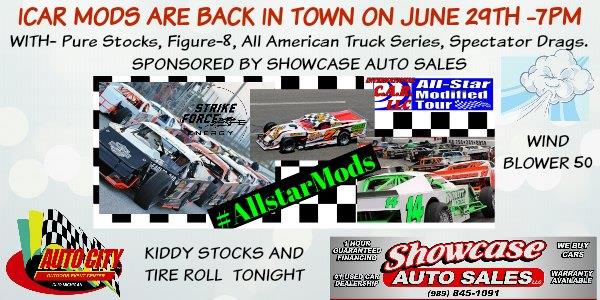 It was a nice sunny and warm summer evening for the I.C.A.R. Strike Force Energy All-Star Modified Tour to make its appearance at Auto City Speedway, along with the regular series as well. Also, sponsor, Showcase Auto Sales was present and made sure to spice things up by adding some bonus money to the top three positions of each division.
In Qualifying, it was the I.C.A.R. Mods up first and it was Davison, MI native Chris Stearns #15 getting the top spot with a 16.082.
With the All American Trucks, it was that familiar #067 of Josh Delong’s getting the number one spot with a 17.87.
In the Herald Pure Stocks it was the #J1 of Jordan Lechota besting the field with a 16.05.
The racing started with the Mods and in the first heat it was fast qualifier, Chis Stearns getting the win. In the second Mod heat race, it was another familiar name to Auto City Speedway, David Christensen’s #39 getting the win.
The Herald Pure Stocks were next and it was current point leader J.T. James Clayton #54 taking the win. In the second heat race, it was a first time winner and rookie this year, J.D. John DoorenBos’s #29 picking up the victory. Also, in this heat race, John Puckett II #51 hit the front stretch wall hard as Lincoln Dunkerson #07 got really loose coming off turn four. When Dunkerson tried correcting, he spun and hit Puckett putting him into the wall and ending his night.
In the All American Truck heat races, it was fast qualifier Josh Delong getting the win. In the second heat it was Paul Rigda III #43 getting his second win in the past two weeks.
Now it was time for the Herald Pure Stock 30 lap feature. As the green flag flew, the field started battling two and three wide. An early leader was J.D. DoorenBos, with Bruce Dunton Jr. #19, Tim Kirby #81, Michael Hayes #12 and others following. As the field sorted out at the halfway mark, it was fast qualifier, Jordan Lechota’s J1 leading the way with Dave Marsh #36, Chad Lamson #888 and Bruce Dunton Jr. trying to vie for position. When the checkered flag dropped, it was Lechota, Lamson and Marsh respectfully.
The I.C.A.R. Mods were on the schedule next for 50 laps. Evan Foster #35 and David McManus #7 started on the front row. Taking the green, McManus jumped into the lead and never looked back. McManus lead the whole race, wire to wire with no cautions. The #13 of Kyle Purvis finished second with Nick Clemens #34 taking the third spot.
Next up was the All American Truck 30 lap feature. In the early laps, it was the #98 of Josh Beechler leading the way with Jimmy Bass #116 and Paul Rigda III #43 and Nick DeBoer #74 all battling for position. Josh Delong started at the very back due to a full invert of how they qualified. But it did not take him long to get noticed, as by lap eleven he had made his way into the third spot behind Rigda and Bass who was leading. When the checkered flag flew, it was Delong, Bass and Rigda in that order.
Spectator Drags were on the schedule and it was a ‘King of the Hill’ version. The winner ended up being Jesse Backus in his red ’93 Camaro.
The Auto City Figure 8 was the closing race of the night and boy what an ending it was. Once the field got sorted out, it was Chad Lamson and Andrew Burton in Dave Marsh's #36 were putting on one fierce battle for the lead. Lamson was leading, then it was Burton, then back to Lamson. At the end of the fifteen laps, it was the #888 of Lamson getting yet another win with #36 of Andrew Burton second and the #067 truck of Josh Delong third.
This coming weekend will be the 4th of July celebration with a Maximum Destruction on Saturday, July 6th at 7pm, which will include a huge fireworks display. Wear Red, White & Blue and get $2 off admission.
You can check out all the details and upcoming events at www.autocityspeedway.com and “We’ll See You at the City”.
Back to News
Driver Registration